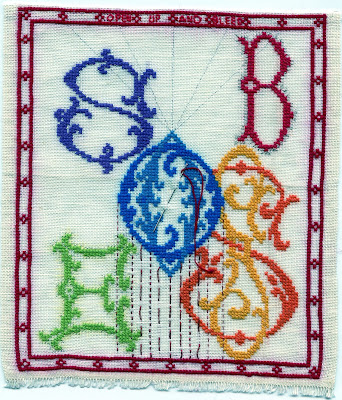 Here it is, this Banff-mandated experiment. My new blog will, I hope, be a way to generate writing and ideas for my larger Text, Textile, Exile project, which is more of a floating matrix (constellation, in Benjamin's terminology) than a form into which content will be poured.
Please send useful links, other blog suggestions and so forth so i can make this as interactive as possible.
The image is Open Up and Bleed: for James Osterberg, Jr. (Iggy Pop). There's a short piece of writing that goes with it that I'll share anon, but right now I'm using it as an example of the fancy lettering I like to use. And here's a bit of writing I did in response to a query I got from a colleague on the subject:

Why Do I Use Elaborate “Fonts”?

This is a question I was asked by my colleague Qadri Ismail, who can be counted on to ask engaging questions and who has become interested in the modernist and contemporary visual arts of his native Sri Lanka, especially those paintings that concern the political conflicts that have consumed much of his country’s energies in the past half-century or so.

No one had ever asked me that, and I took the question to mean a couple of related things. Whether or not this is what Qadri had in mind, I found it useful to proceed to answer what I thought he was asking as a way to clarify what I do and why.

I use elaborate “fonts” in order to foreground the materiality of the letters and by extension, the materiality of language. Like contemporary graffiti, these hyper-rococo, distended, or otherwise distorted letters underscore the “defamiliarization,” or ostranenie, in Viktor Shklovsky’s terminology, that forms the basis of the literary. We are in the realm of the imagination, of people trying to create something. The same old same old can’t be taken for granted but must be challenged. Letters’ and words’ use as instruments of domination without substance of their own must be destabilized, and this challenge is mind-opening. The illumination of letters illuminates the mind by posing a puzzlement: how to read the letter? It’s not a transparent window onto meaning; it must be confronted as an (art) object itself. Traditionally, letters have been illuminated in manuscripts to indicate their status as sacred, and to mark the beginning of a page or passage, an entryway into the world of the text, where different things become possible. It’s a sort of threshold, or border. The words “border” and “embroider” may have etymological kinship; hems and edges are often areas that attract the embellishment of the needle arts, and borders, in eco-systems, are where the most diversity, the most abundant, varied and proliferant animal and plant life flourishes. So the ornamentation of the letters, their being turned into ornaments, marks them as unnatural, as cultural “constructions,” as the old phrase has it, and as cultural creations. At the same time, they are a connective tissue of communication, and this element of their being is materialized by their being rendered in tissue; in cloth and in the elements of cloth: thread, yarn. I initially wrote “threat” and “yearn” here, by error, because words and letters do, after all, signify affectively and cognitively. In the Kabbalistic tradition, letters are spiritual emanations of divine energy, and each has its special divine properties, they are “vessels of fiery potential,” just as in astrology or numerology each configuration or number has characteristics. That they are somewhat abstract–shapes and signs rather than images, which are forbidden–makes them more appropriate representations of the Divine. Paleolinguist and textile scholar E. J. W. Barber postulates that sewing for necessity (joining pieces of animal hide together with needles for shelter or clothing) is contemporaneous in origin with, not precedent to, ornamentation. She observes that the oldest needle archaeologists have found dates from about 23,000 BC, the Paleolithic era; remains of two humans, an adult woman and a male child, each wearing a hat ornamented with three stones sewn into them through central piercings, date from about the same period. The row of three small stones is an ornamentation that supercedes (supplements but is not of a secondary order) the garment’s creatural utility, suggesting that their presence has ritual purpose, though ornamentation in a secular society has come to suggest a second-order, decorative, self-regarding impulse. Thus the ornate is inseparable from the origins of culture, of made-ness and reflection on it: “ornate” anagrams “orante,” the woman who prays.

The other reason–or an other reason–I use ornate fonts is precisely this idea of “old-fashioned”ness. In most, but not all, cases, the cleanliness of modernist style is what I want to avoid; modernist precision is, in its way, more “elitist” –whatever that means, really–than the earnest, petit-bourgeois desire for fanciness whose pathos is at the heart of the “bad poetry” I find so valuable. In the same way that outsider poetry is often marked by indices of passé poetic values–flowery diction, rhyme, contrived or clumsy metaphor–the overly fancy letter suggests a “wannabe” status, the outsider looking in and imitating, in exaggerated and slightly awkward gestures, what s/he perceives as elegance. S/he is not even a parvenue, but a wannabe parvenue. Nancy Spungen dyeing her hair blonde and crying to her mother that even her friends don’t want to spend time with her. John Keats overusing words like “sweet” in order to be poetic, much to the condescending amusement of the literati of his day.

Posted by hyperpoesia at 9:26 AM