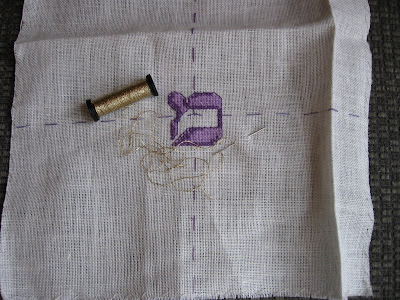 ... is the title of a performance piece/long essay-poem (poessay?) that Adeena Karasick and I have been working on, starting last February. I've been collecting and generating texts and textile pieces for my Text, Textile, Exile project for a few years now, and when I went to New York a year ago (Feb. 2010) I met with Adeena and learned that she too had been working along parallel lines. While reading the entirety of a book we both had essays in (Radical Poetics and Jewish Secular Culture), she had discovered a marvelous pun: shmata (Yiddish, "rag") and shma'atta (Hebrew, "the text at hand") and we were off and running.

We had worked together before, having presented a collaborative closing lecture, "“Simultaneous Jewissance: Performing Critical-Creative Mutual Influence,” for a conference sponsored by the University of Minnesota's Department of Theatre Arts and Dance in 2006, and it had been a gratifying experience, well-received as well as enjoyable, so we had a precedent for working together. We feverishly generated text and then at the end of February debuted our piece as it then was to In(ter)ventions: Literary Practice at the Edge, a conference at Alberta's Banff Centre for the Arts where, a year later, we are both residents in a program by the same name, in which we hope to further our collaboration. We also gave the presentation in slightly altered form at the Post_moot Convocation of Poetry and Performance in April 2010, at Miami University, Ohio.

The photo represents the MEM under construction; i'm adding a gold metallic luster-crust to it to make it a little more interesting.
Posted by hyperpoesia at 1:47 PM