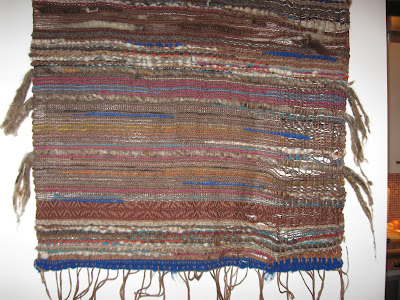 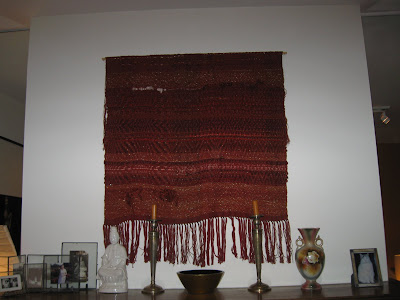 Here are pix of two hangings I made for my friend Ed Cohen, who teaches cultural studies at Rutgers University and whom I've known since our graduate school days in the Program in Modern Thought and Literature at Stanford. The brown/blue one dates from 1989 and the red one from 2008.


Tendencies and Tensions: Weaving the Stuff of Creation
by Ed Cohen


Woven threads: textiles, texts, tissues, living stuff. These plays of warp and woof have variously served as images for language, social relations, human flesh, dreamscapes, women’s work, and the negation of the natural world by human labor more generally--all true enough in their ways. However, they also reveal processes actualized, virtual tendencies made palpable through creative choice and deliberation, decisions which divide the what may have been or may yet be from the what is, and simultaneously wind them all together. Woven events incarnate an ontology of time that Henri Bergson named “duration,” a time of change from which the unexpected may tear free of the already known or the presumptively knowable. Thus, they can actually manifest freedom as a creative form. Cunningly detained within the loom’s tightened strings, time may reveal an élan vital—a living spirit.

Bergson (especially as reworked and refigured by Gilles Deleuze) posits duration as a “virtual multiplicity” which entangles “heterogeneity and continuity.” As Deleuze puts it, virtual multiplicity “does not divide up without changing in kind, it changes in kind in the process of dividing up.” Enduring time represents tendencies spun and unspun, wound and unwound, changing and unchanged. Knotting this divisive coalescence together requires tensions and “de-tensions” [détentes], contractions and expansions, restrictions and transgressions: “Duration is only the most contracted degree of matter, matter the most expanded [détendu] degree of duration.” Tractions and tractabilities mold the mortal coil.

Underlying Bergson’s (and Deleuze’s) metaphysical intuition, lie manifold intentions, attentions, extensions, retensions, detensions, protensions, tendencies, and intensities: in short “tensions” that tend simultaneously towards and away from each other and thereby make the universe matter for a time. All these tendentious concepts trope on a hidden etymology: the Latin tendere refers to stretching, as in the stretching of an arm or a bowstring, i.e., to the movement of something beyond itself even while it remains itself, to the elastic spring of being. Essentially taut and loose, the universe weaves itself into being. Shuttling (between) time and matter, it creates the enfolding fabric of existence.

On the loom, strands stretched between cross pieces of a frame create a potent emptiness. They determine a field of indecision which calls forth decisions. They manifest a matrix of fertile vortices which hail color and texture. Each choice rends time, slicing the virtual from the actual. This fiber, this tension, this movement, this instant growing out of, flowing out of, increasing and enhancing by restricting and condensing, the indeterminate potential from which it emerges. The resulting fabric, inexorably tied to its moment of creation, sutures past, present, and future, making time matter.

The gift of fabric, then, is literally, actually a gift that keeps on giving. The tapestries that adorn on my walls and the scarves that caress my neck bless me not only with their beauty and their palpable grace, but also with the temporal traces that weave us all together. In each unique piece, I hear the sun that warms the grass, the sheep that shed their wool, the hands that spin and dye the yarn, the tools that build the loom, the fingers that move the shuttle, silently sing together a chorale of praise to the stuff of creation. And for this blissful texture, I bow in thanks to my friend Maria who has bestowed such stuff upon me time and time again.
Posted by hyperpoesia at 9:41 AM