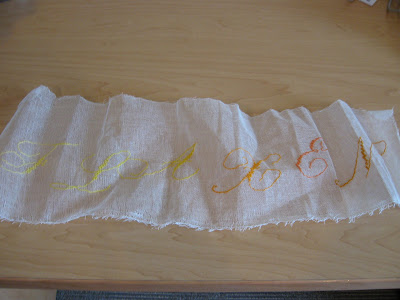 Here's a little shmata, a shreddy raggedy token, for the marvelous Jen Bervin, a high-art textile artist and poet. By contrast I consider myself not exactly a lowlife but not so high art in my aspirations, theoretical orientation, or execution. Here are pix of it before and after I've pressed it, because i like the raggediness of the half-made.

Speaking of shreds, the word refers to cuttings, dried and shriveled skin (is anyone else thinking of ritual cuts that remove skin from sensitive organs in a potentially traumatizing, but also identity-giving way? Being marked through being cut), and is related to the word "shroud." Reminds me of the strips of papyrus found wound around mummies during the great archaeological excavations of the late 19th c, and the discovery of Sappho's poetry, which until then had been only legendary and apocryphal, in fragments that dissolved even as the archaeologists unwound them from the ritually desiccated bodies they had been ritually bound around.

Shredding also refers to electric guitar playing of a highly intense nature, no?
Thinking of any interesting addenda? Please contribute!

scrod
1841, "young cod, split and fried or boiled," possibly from Du. schrood "piece cut off," from M.Du. scrode "shred" (cf. O.E. screade, see shred). If this is the origin, the notion is probably of fish cut into pieces for drying or cooking.
A Boston brahmin is on a business trip to Philadelphia. In search of dinner, and hungry for that Boston favorite, broiled scrod, he hops into a cab and asks the driver, "My good man, take me someplace where I can get scrod." The cabbie replies, "Pal, that's the first time I've ever been asked that in the passive pluperfect subjunctive."
Posted by hyperpoesia at 10:49 AM