Here's the blogsite for the mail art show I sent something off to recently. It's nice that they make everything available for viewing online, though many of these call for touch as well. Haptic/synaptic.

I've been thinking of the seeming decorousness of textile arts, especially as feminized as they are in our culture, and how this often displaces, or plays a strangely adjacent role, to inner wildness. Adrienne Rich's "Aunt Jennifer's Tigers" hints at this but in a compensatory, diminishing way; Aunt J is clearly less than she should/could be. Why should this be? The sock-yarn named Iggy Pop (see, for example, http://www.flickr.com/photos/berthacrowley/2341363413/) seems sorta ridiculous, but then think of the lady knitting far into the night, listening obsessively to Raw Power, as i did when weaving at the IAS a few years ago; it's trance music for a trance activity. It's creative and violent in its own way. The dark night of the soul becomes the cute baby socks or the dangerous punk fashion style accessory, lovingly made with artful design. Tragic histories are hidden behind sumptuous textile creations. The drama of rock and roll sublimates as much as the lace, linens and embroideries of altar cloths and torah covers...

The people writing such texts as "Aunt Jennifer's Tigers," or Henry James, who, in a devastating last sentence, condemns a "spinster" to disappointed, bitter life-solitude (""Catherine,... picking up her morsel of fancy-work, had seated herself with it again — for life, as it were."), are writers. Maybe they see their own activity as superior to, or more expressive than, these women's "fancy-work," in a typical gendered division not only of social prestige (writing is "head-work," needlepoint is "hand(i)work"), but of the permission or assumption of the right to express anger or any powerful emotion. But perhaps I'm being unfair and it's more the case that there is a positive–or, more likely, ambivalent and ambiguous– identification at work: that Rich and James understand themselves and their subjects as involved in the same kind of sublimation that constitutes this kind of hobbyist, minor manual labor, concentration, freeform improvisation, cultural expression.
Posted by hyperpoesia at 8:00 AM 1 comments

These words are not related, though I wish they were ... there's enough overlap with other cool etymologies I've posted earlier, as well as with compelling textilic words with wider resonances. And the Sanskrit WAR, to cover, protect, clearly seems related to veil; or to weave... The notion of concealment, covering, enclosure whether as an in-spiraling shell (vulva) or a shaggy fleece (velvet), emerges repeatedly. The need for shelter and the need to be known are intimately related to the mysteries of concealment and revelation at play in writing and textile practices.

Another element comes to mind in the practice aspect of this nexus of need and mystery: the rhythm of the practice itself, whether it be the clack of the loom (the Dogon myth of origin ascribes creation to "the creaking of the word," i.e. the sounds of the loom creaking and clacking in the weaving process) or the gentle click of the knitting needles in institutional meetings, the reassuring movement of hand and pen across paper in the kind of self-soothing relationship attributed to children's feelings for their various transitional objects, the typewriter's thump or the muted sound of the computer keyboard, or the visual rhythm of etymological dictionary entries, the lists of abbreviations, symbols, varied fonts and cases, the iterative spell of wordlists on the page and in the mind's ear.

VELVET, a cloth made from silk, with a close, shaggy pile; also made from cotton. (Ital.,—L.) 'Velvet, or velwet, Velvetus;' Prompt. Parv. Chaucer has the pl. velouëttës (four syllables), C. T. 10958; whilst Spenser has vellet, Shep. Kal., May, 185. β. Again, the form vellure occurs in Holinshed, Descr. of England, b. iii. c. 1 (R.); which is borrowed from F. velours, 'velvet,' Cot. γ. But velvet, velwet, velouet, vellet are various corruptions of O. Ital. veluto, 'veluet,' Florio; mod. Ital. velluto. The word is interesting as being almost the only Ital. word (in E.) of so early a date; it may have been imported directly from Italy. The Ital. velluto answers to a Low Lat. form villutus*, shaggy, allied to Lat. uillosus, shaggy; whilst F. velours (O.F. velous, the r being unoriginal) answers to Lat. uillosus directly.—Lat. uillus, shaggy hair, a tuft of hair; so that velvet means 'woolly' or shaggy stuff, from its nap. Allied to uellus, a fleece; orig. 'a covering' or 'protection.'—✔WAR, to cover, protect; cf. Skt. úrna, wool, lit. a covering, from vri, to cover; and see Wool. Der. velvet-y, velvet-ing. 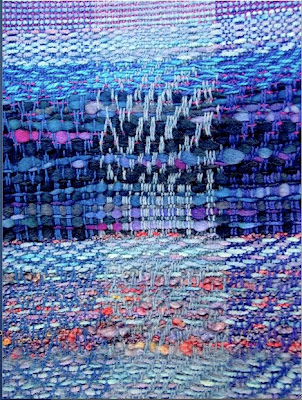 Yesterday I made it to the post office right before 5:00 closing, to send out copies of my chapbook (Meshwards) to the Dusie Kollektiv. I'd spent a few happy hours with the wonderful poet Beth Workman stuffing and labeling 85 envelopes with our two books; we then split the goods and each mailed out half.

In return, I've been getting chapbooks from other Kollektiv members. It's really thrilling to see this alternative poetry gift/exchange economy unfolding. There's a wide variety of work and imaginations and they come in different-sized envelopes making a tantalizing pile on my stainless steel kitchen table.

The cover image, reproduced above sans text, is a close-up of a section of a baby blanket I made for Omi Tinsley's baby, Baia.
Posted by hyperpoesia at 3:22 PM 0 comments