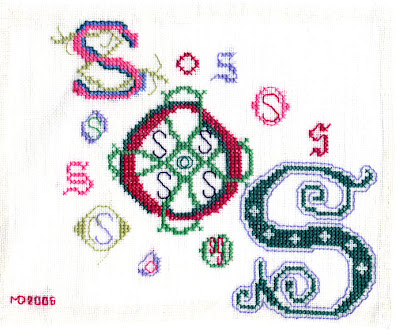 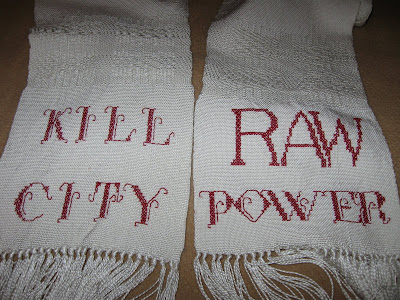 The (Asemic) Raw Power/Kill City scarf is in the mail to Bury, England, UK. Whew.


I asked my colleague Michael Hancher to scan in a piece I'd made for him back when he was the chair of my department. He did a great job of being fair, even-handed, non-defensive and intellectually engaged. I called it, obviously, SOS. He salvaged the department. It looks a little psychedelic, with a central mandala and smaller "bubbles" around it, and it looks to me as if it were floating past on a river of linen drifting off to the viewer's right. I made the Iggy piece, "Open Up and Bleed," after this one, and I can see the resonance: the big circle (O) in the center and the other letters swirling around it. I've read that the shape of the letter O comes from the eye; some ancient alphabets have a dot in the center for the pupil. That works for TV Eye in Stooge-speak.
Posted by hyperpoesia at 11:47 AM