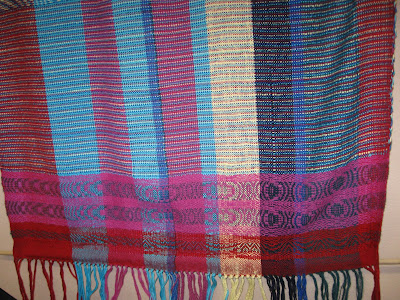 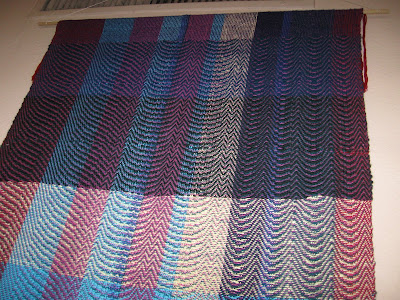 And here's the other piece I did in my IAS residency. It has that flamboyant name because there's a great protopunk, garage song, "Psychotic Reaction" that bristles with energy and was inspirational for a lot of rock writers (esp. Lester Bangs) and later musicians. I was also thinking of the pun on "I" as...psychotic reaction, because of the formation of the "lyric I" as a (sort of sane, or at least understandable if somewhat misguided) response in the history of poetry to industrialization.

The weaving really has nothing to do with that, though. It's just meant to be a fun title. Also, Susannah L. Smith of the IAS aided and abetted my punk enjoyment during that spring by talking about her pogo-ing and Ramoning days. She gave me the dark green yarn that appears in the piece, so I thought I should at least obliquely acknowledge her influence and our garage-rock bond. She is also the cousin of guitarist Nathaniel Braddock.
Posted by hyperpoesia at 8:04 AM