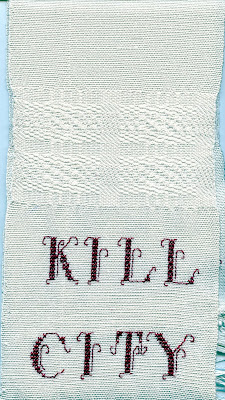 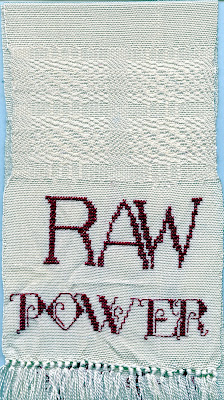 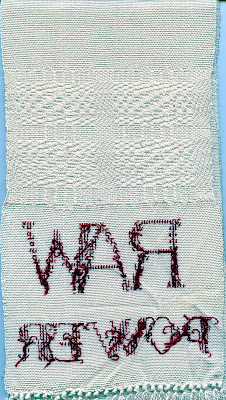 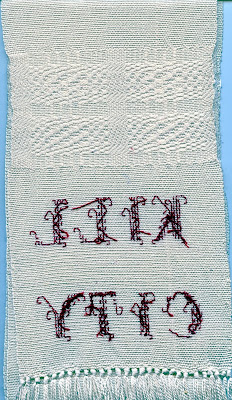 Here're a few more shots of that scarf I made for James Williamson to acknowledge his rejoining the Stooges after a 30-year hiatus. I'm sending it off to one of the exhibits connected to the Text Festival in Bury, England, UK from May to July–overlapping with the time the Stooges will be touring the UK and Europe. I won't be seeing them, as they're doing the festival thing and that's just too many people for me, but I will be at their Ann Arbor benefit for the Ron Asheton Foundation in April. Very happy, not only to be seeing Iggy and the Stooges, but to meet some of my Facebook friends in the Stooges fan community.

The "asemic" element in the title refers to the reverse-side shots, the back view of x-stitching. You can sort of tell what it says but it's not fully clear. Sure enough, that's what those hotshots at the Text Festival were interested in when they contacted me. It was through the shots I posted on Facebook. How do you like that.

For the patterned part of the white scarf, I used the Undulating Twill pattern from The Handweaver's Pattern Book, by the great Marguerite P. Davis, which is a sort of bible for weavers of my generation who learned to weave in the 1960s and 1970s. This is my third copy, and it's already getting torn and frayed. The pattern is one of my favorites, because it has a slightly hallucinogenic, swoopy wave effect, resonating well with the swoopy, slightly hallucinogenic 60s and 70s. The patterns all work for a four-harness floor loom, which is what I've got.

I've never packed up anything for an exhibit before: I've let mIEKAL handle that if it needs handling, or just sent snapshots or scans to be exhibited in lieu of the real thing, which has often already been given to its intended recipient by the time an exhibit opportunity comes up, so I need to get some "tissue paper" which, I assume, is not the same tissue paper as Kleenex, then some bubblewrap (how I wish I hadn't so virtuously thrown all mine out a few months ago), etc. All the little steps of this new medium are annoying and exciting at the same time.
Posted by hyperpoesia at 4:14 PM