Psychedelic White: Bollywood Ringtone Suicide –Not What it Sounds Like. 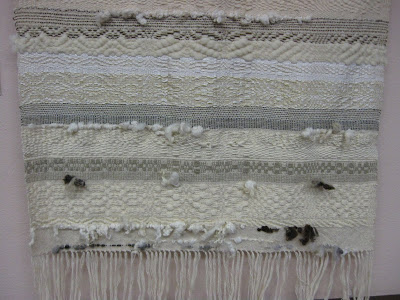 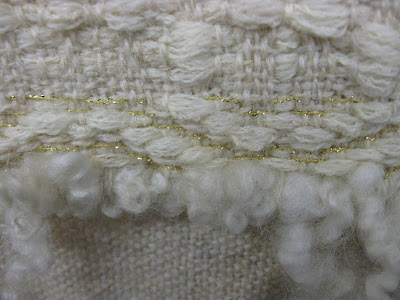 Here're a couple of photos of one of the two pieces I wove for the Institute of Advanced Study here at the U of MN during my residency there in Spring 2008. I called the piece Psychedelic White: Bollywood Ringtone Suicide, after the projects of my fellow Fellows. Arun Saldanha had written a book called Psychedelic White: Goa Trance and the Viscosity of Race; Jigna Desai works on Bollywood beyond Bollywood; Sumanth Gopinath is writing a book on ringtones and globalization; and Hoon Song was working on teen suicide clubs in Korea (the link, though, is to his book on miners and unemployed pigeons, I mean the other way around). One of the patterns I used (again from Marguerite Davidson's pattern book) was Blooming Leaf, because Rachel Slocum works on farmer's markets and race, and is an ace gardener.

I like the fluffiness and magical properties of the fleece mixed with the gold metallic; I'd like to be enveloped in such a cloud without earthly substance but lots of sensation. And there's a textual dimension to the patterning as well, reminding me of sheet music to be sung, a score made of tactility. And that group of IAS residents also had magical and fluffy properties. They were a great posse. I had hoped to make my weaving projects somewhat more communal: have my office door open, invite people in, have them weave bits of the pieces themselves, because community is one of the things I really enjoyed about the IAS, and it's one of the key elements for me in poetry scholarship and practice. In fact it didn't really happen in exactly that way, because everyone was busy, and i wanted to blast Stooges music while I wove, which inhibited my open door policy. But we did other stuff together, like going out for a drink/nosh after the Thursday talks, and now Arun and Rachel are neighbors. I felt enveloped in a cloud of creativity, intelligence and expansiveness that spring, after a few weeks of initial awkwardness that apparently accompanies every new cohort's semester-long course of togetherness.
Posted by hyperpoesia at 8:52 AM